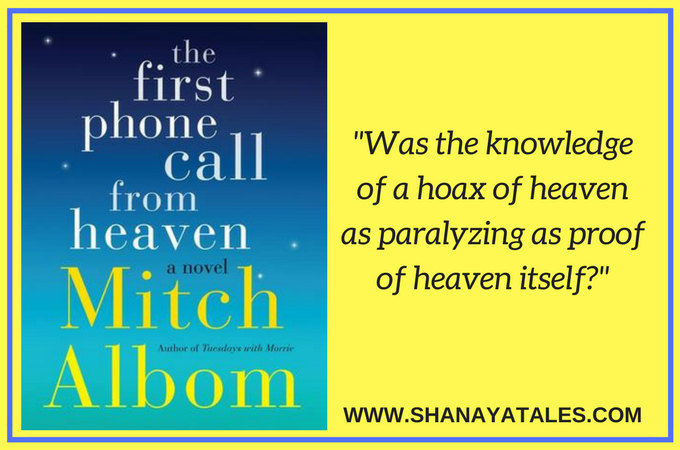 First one month after Dad’s leaving, my brother and I tried to look for any videos left which had Daddy’s voice on it. Glady we found two videos which were taken when Dad travelled Malaysia. As odd as it sounds, the moment I played the video and heard Dad’s vaugely voice was such a moment of joy. It just feels like having him around again. Real yet unreal.

Three weeks ago, I went to the bookstore and saw this book “The First Phone Call From Heaven”. I was so carried away by this piece from Mitch Album.

The book told a story about people in Coldwater, Michigan, that were shocked by the calls received from their deceased relatives. Some were happy to be connected to their sister, son, or close friends even for 30 seconds talk, while others tried hard to prove that the calls were just a make up, unreal.

Reading the book, I am relieved to know that somewhere out there, people somehow have this desire to recall the past, through the voice. I believe that those who read this book more or less must have the similar feeling as I had. (This is probably why people love fiction, isn’t it? It helps you picture the unreal thing, real.)

And, beside the story itself, Albom also gave a brief story about how Alexander Bell invented the call. There’s also a romantic part of Alexander with Manel, the love of his life, who was deaf. So, enjoying the fiction and knowing the history at one time. Throwing two birds in one stone. 🙂

Had it not been for a man’s love for a woman, making him jump aboard the train, Bell’s phone might never have found an audience. Once it did, life on earth was altered forever. (p. 83).

We call out; we are answered. It has been that way from the beginning of belief, and it contunues to this very moment, when late at night, in a small town called Coldwater, a seven-year-old boy hears a noise, opens his eyes, lifts a blue toy to his ear, and smiles, proving heaven is always  forever around us, and no soul remembered is ever really gone.

0 thoughts on “The First Phone Call From Heaven – Mitch Albom”