Never had I thought that I will have one chapter in my life written in Bangkok starting last end of March 2018.

At this very moment, I’m one of the 9,79 million population in Bangkok.  Glad to be here!

To start, people here are very nice and polite. Perhaps you ever witnessed unpleasant experience during your visit here. Me also. However, I have more nice than bad things here when it comes to meeting people, so here comes this post.

Once I went to a night market with my friend. It was a market where the tenant staff will stop by your desk to offer foods and drinks. I then ordered a bottle of beer. I didn’t have any penny left so I gave a money which was closed to the beer price. Let say it was 75 Baht and I gave the guy 100. When he got my money, he tried to say something in Thai, which of course I couldn’t understand. 5 minutes went by, he had not come back. Another 5 minutes, no clue. I forgot his face because it was quite dark. I told my friend, “I’m not sure he’s coming back with the return“.

10 minutes after, they guy came back with my return without taking not any penny.

Oh. I felt so guilty.

I have a strong sense that Thai people are very genuine when doing something, especially for the service-related. This thought comes a lot when I am in a public place and see how local people are interacting one to another. (This is also why I always love taking a public transportation in another country such as subway, train, bus, tuk tuk, boat, just any kind of vehicles. I love seeing and being around the local people because you could see many surprisingly nice things.)

Last week I took a bus for quite a distance. It was about 10 km from my place, Ekkamai, to Bangkok Chinatown area, Yaowarat Road. This must be weird, but I’m always awed with the bus helpers in Thai public transportation. They are the one who collects your money for the bus ticket. They have this special skills with the steel tube and cutter in the middle to cut the ticket or to fold the money. Some of them could do it very quick (I tried to find that steel tube in Google, but hasn’t found it yet). I feel like watching a show in a mini stage, called bus.

Back to the the bus story.

It was around 6.30 pm. The bus helper was a mid 40s man wearing glasses and jacket. He was in a full uniform and still looked so tidy at that hour. And so did the driver.

This wasn’t the first time I saw the driver and his helper dressed up so formal in the public bus. Thai bus operates until 7.30 pm. The fact that perhaps driver and helper have worked for over 6-8 hours and keep the look clean impressed me in a way.

Despite from the governmental rule, for me, this show how people here appreciate their jobs and people they meet. High respect to the bus driver, bus helper, parking man, security, shop staffs, for doing his job very thoughtfully to everyone.

Also, if you happened to visit one of the biggest supermarket chain here named Big-C, you’ll find a middle age man or woman greet you on your way in or out while folding their hand in front of their chest, while saying Ka pun ka / khap. Don’t forget to reply them back in a smile.

One morning I saw a motorcycle taxi driver (or “ojek” in Bahasa) suddenly stepped down his motorbike during the red light to help a car that was about to turn to a forbidden roadway. Fortunately it was a huge morning traffic so I was able to see how this scene ends. 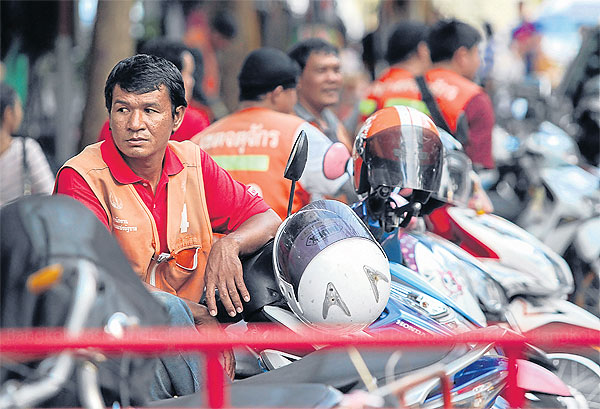 With still his helmed and vast on,  this driver guided the car slowly, while asking other cars and bikes from other sides to stop.  Once the car found his way, (I thought the motorbike driver would intend to stay closed by the driver side to ask for a money, but he didn’t at all), he stood in the opposite side of the driver so the car could just move right away. After that, he went back to his motorbike. Traffic light turned green, driver rode his bike away, street went back to normal. No crazy horn, no people shouted, no complains.

Again, I’m awed. And felt a second guilty for wrongly judging a person

This post is dedicated to mark my 109th days in Bangkok.